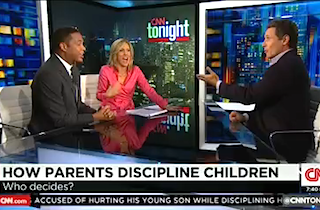 The national conversation about corporal punishment of children, spurred by the indictment of Minnesota Vikings running back Adrian Peterson, continued Wednesday night with a CNN debate that started quite reasonably but eventually went off the rails with Don Lemon comparing hitting a child to hitting a dog and then eluding to “slave masters” as justification for the practice in the black community.

Chris Cuomo, who was stopping by from his usual position at New Day, offered up his opposition to corporal punishment, making the point that based on research it’s not actually the best deterrent for bad behavior.

Lemon immediately disagreed, using his own background, as he did earlier this week, to argue that in certain situations hitting a kid can actually prevent worse violence, like them running into the street and getting hit by a car.

RELATED: O’Reilly: Some Children Might Need a ‘Little Whack’ Once and a While

“For me as an African-American, the question is where did you learn that from? Is that learned from the slave master? Getting the switch? Being beaten?” Lemon asked at one point.

“How is that a rationale?” Cuomo shot back. “I keep hearing this. Well, maybe it was passed down from slave culture. Why would that be a rationale to continue a practice like this? Isn’t that the last thing you would want to continue?”

“Why not break that cycle?” Alisyn Camerota added.

Cuomo asked Lemon if he really believes he stayed out of trouble as a kid because someone “beat you ass.”

“You said some one beat my ass, someone didn’t beat my ass,” Lemon responded. “My mom spanked me. That is not a beating. There is a difference.”