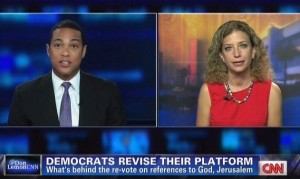 Following the eventful week DNC Chair Debbie Wasserman Schultz has had, CNN’s Don Lemon invited her to set the record straight on Saturday. Confronted with her accusation of being misquoted, as well as the debacle surrounding the Democratic platform’s changes, Wasserman grew defensive, but maintained she stands by what she said.

Lemon began with the congresswoman’s remark about Republicans and Israel, which she said was misrepresented by the Examiner. The quote: “We know, and I’ve heard no less than Ambassador Michael Oren say this, that what the Republicans are doing is dangerous for Israel.”

Wasserman Schultz said that the Examiner said she said Republican policies were dangerous for Israel — and that’s not what she said. What she said is, “Israel should not be political football. What the Republicans are doing, they are suggesting that there is daylight between the parties on Israel.” Not their policies, but what they’re doing, is dangerous, she insisted.

But Lemon noted that she inferred it, and that the ambassador even issued a denial. That statement was issued in response to a misquotation she insisted. Asked whether she regretted anything or would’ve said anything differently, Wasserman Schultz said no.

And then about Democrats putting God and Jerusalem as the capital of Israel back in the platform. When Obama realized that there was an omission made about two items, he insisted they be put back, she said. Then interview grew heated as Lemon insisted “it had to be intentional” to remove those two things. Especially coming from a Jewish American, shouldn’t she be the one to make sure that’s not an oversight?

Wasserman Schultz evaded directly answering the question and responded by noting that the Democrats already had a strong pro-Israel platform, and Obama insisted to make the Jerusalem alteration to reflect his personal view. “There was never any process that took it out,” she said.

Lemon wasn’t buying it — arguing that, when looking at the 2008 and 2012 platforms side-by-side, someone must have noticed the discrepancies. “Come on, congresswoman,” he said. “Don’t you think people appreciate candor more than anything?”

“Yes,” she replied. “And I don’t appreciate you suggesting that I’m being anything less than candid.” As she expressed her pride as a Jewish congresswoman and Obama supporter, Lemon stepped back, saying he didn’t mean his statement as a personal attack.

“Believe me, I have never been accused of being anything less than candid,” Wasserman Schultz added. “Directness is not my problem.”

To that point, Lemon mentioned that recently he’s read people say that Wasserman Schultz will say anything, true or false. Yes, she agreed, there are “right-wing Republicans that spend a lot of time trying to suggest that. I have a 20-year record of credibility, and I’m proud of that record.”

Then Lemon asked why the two-thirds voting affirmative was already in the teleprompter. Wasserman Schultz noted that the Democrats are strongly pro-Israel, so it was anticipated that it would be affirmative. The media made much ado about “discord,” she said, but “a smattering of opposition” isn’t it (noting that “we don’t do things unanimously”).

Take a look at the segment below, via CNN: