Don Lemon Takes Dem and GOP Rep. To Task: ‘Why the Hell Can’t You Work This Out?’ 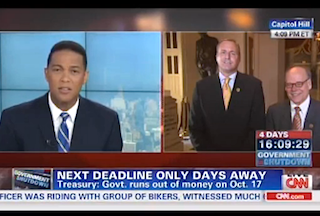 CNN’s Don Lemon took on two congressman from either side of the aisle Saturday in attempt to find out what the next steps might be to put an end to the nearly week-long government shutdown. “We’ve heard the bickering all week,” Lemon began, referring to infighting between the parties as well as within the GOP, “but we’re no closer to a solution.” He asked Reps. Steve Cohen (D-TN) and Jeff Denham (R-CA) if the two sides have been able to find any “middle ground.”

Cohen began by saying not only have they found a “middle ground,” they’ve found “Republican ground,” with Democrats moving the budget numbers towards when the GOP has requested. “We compromised and gave them what they want,” he said. “They can’t take yes for an answer.”

Denham said that despite his “good friendship” with Cohen, they have a differing of opinion on these issues. He maintained that Republicans want to “keep the government open” and return furloughed workers to their jobs.

Lemon was baffled that these two congressman could be standing next to each other and laughing, asking “Why the hell can’t you work it out?”

“John and Nancy aren’t as close as Jeff and I are,” Cohen joked, in reference to Speaker John Boehner and House Minority Leader Nancy Pelosi. Meanwhile, Denham placed some blame on President Obama, who he said “needs to get seriously engaged in this.”

Lemon brought up that the one thing the two men had not yet mentioned was Obama, which he described as “the reason you shut the government down.” He said, “The president has said you’re not going to get it with health care, it’s not going to happen, so why not present a clean bill and then work on the other things?”

When they continued to talk about the budget, Lemon interrupted again, saying, “You guys are giving talking points. The issue is health care. That’s why the government is shut down and you keep bringing other things in.” He asked them, “What are you not understanding here?”

Lemon invoked the Capitol Hill car chase the took place Thursday to ask why they can’t come to an agreement to keep paying “those police officers who saved the lives, I’m sure, of a number of people.” He asked Denham specifically, “Why do you keep going up against a brick wall?”

Not satisfied with the answers he was receiving, Lemon jumped in with, “You’re still not understanding me. Open the government and stop holding the American people hostage!”