Don Lemon Tears into Megyn Kelly: ‘What Your Jesus and Santa Look Like Is Entirely Up to You’
video

Don Lemon Tears into Megyn Kelly: ‘What Your Jesus and Santa Look Like Is Entirely Up to You’ 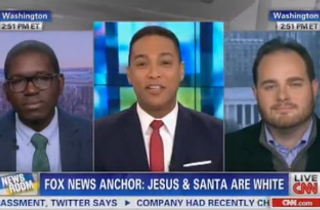 In a CNN segment this afternoon, host Don Lemon and guests mocked a Fox segment in which Megyn Kelly declared that Santa Claus and Jesus are both indisputably white.

After playing the clip of Kelly telling viewers it is a “verifiable fact” that both Christian figures are white, Lemon and guests Jamelle Bouie and Eric Marrapodi did what many American viewers did this week: Laugh.

“I can’t believe I’m discussing this,” Lemon said, introducing the segment as a response to how many opinionated comments he’s received on social media since Kelly’s segment aired.

Bouie explained his Daily Beast column that decried Kelly’s beliefs about Santa being factually “white” as “utterly ridiculous,” while Lemon inserted that “Santa Claus is black” to him and many other black households. But the panel eventually moved off the Santa argument, noting that it’s a “ridiculous” debate because of it being a fictional character.

“Where [Kelly] lost me was with the Jesus thing,” Lemon said. CNN senior producer Marrapodi explained that “we don’t really know” the skin color of Jesus, and it’s highly likely he had an “olive complexion” as a Middle Eastern man in the first century.

“Anyone who has studied the Bible and anyone who knows about the heritage or roots of Jesus knows he was a dark-skinned person and wasn’t a white man,” Lemon asserted. “Not probably wasn’t; he wasn’t a white man. He was of a darker persuasion.”

Ultimately, Lemon and his panel concluded: “What your Santa and your Jesus looks like is entirely up to you.”