Don Lemon To CNN Panel: How Bad Is ‘N*ggerhead’ Story For Perry Campaign? 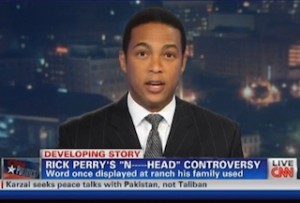 This past Sunday the Washington Post published a lengthy report on a family camping site rented by Texas Governor Rick Perry that went by the name N*ggerhead Rock. The article goes in great detail asking legitimate questions surrounding the camp, and includes contains a denunciation by Perry, but also seems to find the embattled GOP candidate guilty by association for what is suggested to be tolerance of the offensive name.

Last night CNN’s Don Lemon very carefully reported on the story then asked fellow panelists if the Perry campaign can recover from even being associated from this story.

Lemon introduced this story with the same surgical tact that a bomb defuser might approach an unmarked package left in a Times Square subway stop. In fairness to all involved in this story, the WaPo story was built around numerous anonymous sources and it’s still too early in this story’s life cycle to truly understand its scale and potential political impact. This could blow up and kill a career, or could be a dud. Only more facts will reveal from which fire this smoke appears to be emanating.

LZ Granderson, who is considered by many to have a left-of-center point of view, did not demur in his assessment, saying that this was a “huge” problem before openly wondering how Rick Perry could theoretically stand across a stage from Barack Obama with this story hanging over his head. On the other hand, Will Cain, who self-identifies as conservative, refused to opine how this story might resolve itself until all of the facts came in. He did agree, however, that this word is so powerful that, if true, it would be hard to imagine how anyone’s political career could recover.