Donald Sterling Is Now Blaming Racist Rant on His Penis 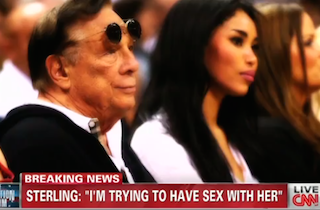 The audio recordings of Donald Sterling just keep coming, this time via Radar Online, which has been releasing snippets of alleged phone conversations the disgraced L.A. Clippers owner had with an unnamed “friend.” Yesterday, we heard Sterling defend his original racist rant by saying “I’m not a racist.” In the latest audio, Sterling says no one should take his comments seriously because he was just “trying to have sex with” his alleged mistress, who leaked the tape.

CNN aired clips from the new audio on The Situation Room Friday. The voice on the tape, which CNN said it could not “independently verify” was Sterling’s, says, “I’m talking to a girl. I’m trying to have sex with her. I’m trying to play with her. If you were trying to have sex with a girl and you’re talking to her privately and you don’t think anybody’s there, you may say anything in the world!”

“I know what I said was wrong,” Sterling says later on the tape. “But I never thought the private conversation would go anywhere, out to the public.” He says his comments were based on jealousy, not racism. “I didn’t want her to bring anybody to my games because I was jealous!” he insists. “I mean, I’m being honest.”

In the mean time, the NBA has installed former Time Warner chief Richard Parsons to replace Sterling as interim CEO of the Clippers. Sterling’s wife, Shelly Sterling, has indicated that she would like to maintain ownership of the time, a move coach Doc Rivers said would be a “very difficult situation for everybody.”

Listen to the full audio below, via Radar Online: