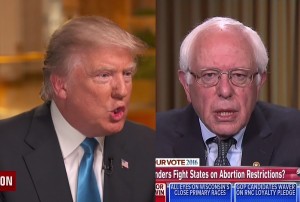 The issue of abortion rights is one that is not well understood, even by those with strong opinions about it (i.e. everyone) and especially by the media, but with a vacancy on the Supreme Court and all hell breaking loose on the campaign trail, it needs to be. After a week that was dominated by Donald Trump‘s gyrations on whether women should be punished for having abortions, a fascinating and revealing drama on the issue played out Sunday, in three acts.

First, there was the aforementioned Donald Trump, who seems to have settled on “whatever Reagan said” as his position on abortion, but who further demonstrated his lack of intimate familiarity with conservative doctrine on the issue in an interview with Face the Nation‘s John Dickerson. The upshot here is that Trump does think abortion is murder, but notice Trump’s panicky attempts to avoid answering so as not to give the wrong answer again, since punishing baby-murdering sluts seemed so obvious and turned out to be wrong. You can actually see him mentally flipping a coin as he finally settles on agreeing to not disagree that abortion is murder:

The poorly-understood (especially by the media) fact about the “pro-life” movement is that they won’t say women should be punished criminally because they can’t sell that, the same way they can’t sell trap laws as a de facto ban on abortion. The main reason they can’t sell it is because, thanks to Roe v. Wade, it just isn’t on the menu, but as demonstrated by anything in a Guy Fieri restaurant, once it’s on the menu, it will sell.

Someone who does have a deep understanding of the abortion rights issue is Hillary Clinton, who is the next player in our three-act drama. In an interview with Meet the Press moderator Chuck Todd, Hillary explained her support for Roe v. Wade, which she said allows for “reasonable restrictions” on abortion, but then was asked whether an unborn child, at any point during pregnancy, acquires constitutional rights.

CHUCK TODD: When, or if, does an unborn child have constitutional rights?

HILLARY CLINTON: Well, under our laws currently, that is not something that exists. The unborn person doesn’t have constitutional rights. Now, that doesn’t mean that we don’t do everything we possibly can, in the vast majority of instances to, you know, help a mother who is carrying a child and wants to make sure that child will be healthy, to have appropriate medical support. It doesn’t mean that you don’t do everything possible to try to fulfill your obligations. But it does not include sacrificing the woman’s right to make decisions. And I think that’s an important distinction, that under Roe v. Wade we’ve had enshrined under our Constitution.

Now, I know what conservatives are thinking. What’s a “reasonable restriction?” No double coupons?” What Hillary Clinton is talking about is Roe’s “viability” standard, which has been chipped away at since the decision. Hillary’s support for that standard is key to maintaining support for abortion rights, though, because public opinion on abortion rights is so conflicted and tenuous. Late-term abortions are exceedingly rare, and as Hillary mentioned, pretty much always involve threats to the life and health of the mother. But to the average person, this “constitutional rights” framing might seem contradictory. If a fetus is viable, and eligible for protection by the law, doesn’t it then have rights? It’s a nuanced distinction that anti-abortion zealots have exploited to, among other things, accuse Hillary and President Obama of “supporting infanticide.”

Enter Bernie Sanders, who appeared on This Week with George Stephanopoulos Sunday morning, and reassured voters that in addition to Citizens United, he would also use Roe v. Wade as a litmus test for Supreme Court nominees. Those are the only two litmus tests he will name. Now, Sanders has spent part of the past week defending himself from a rather unfair attack by Hillary Clinton over Trump’s abortion remarks, and in the process, has defended his pro-choice voting record and support for women’s reproductive rights, and he’s right. He has always voted the right way, has the right attitude, sincerely believes in a woman’s right to choose.

But when George Stephanopoulos shopped him Hillary’s answer to that “constitutional rights” question, Sanders veered sharply off course, and demonstrated the difference between being on the right side of an issue and having a deep understanding of it:

STEPHANOPOULOS: You know, Secretary Clinton also said this morning that she doesn’t believe that there are any constitutional rights for the unborn. Is that your position, as well?

SANDERS: All I know is that I will fight as strong as I can to defend a woman’s right to choose. I believe that it is an outrage that Republicans who tell us how much they hate the government now want to tell every American — every American woman what she can and cannot do with her body. And I do agree with the Secretary. I don’t believe there’s any constitutional protection for the unborn.

STEPHANOPOULOS: Are you for any restrictions on abortion?

SANDERS: I think that decision ultimately has got to be made by the woman. I have a 100 percent pro-choice voting record throughout my career. That decision must be made by the woman, must be made by her family and her physician, not by the federal government, not by the state government. And let me tell you something. If elected president, I will not only fight to protect “Roe v. Wade” and a woman’s right to choose, I will take on the Scott Walkers of the world and the other right-wing governors who are trying to restrict and limit that right.

Now, you’re probably not going to see this clip anywhere else in the near future, because Hillary Clinton isn’t going to attack Bernie Sanders for being to her left on abortion, and Republicans aren’t going to mess with Bernie’s chances against Hillary, but you can bet that if he ever makes it to a general election, this will be an attack ad. Like Trump’s botched responses, this sounds like the right answer, but the thing about abortion rights is that saleability works both ways. Public opinion is at an uneasy equilibrium with the Roe viability standard. Take Trump’s line, and 70% of people are against you. Take Sanders’, and it’s 80%.

Hillary Clinton understands that, while also understanding the crucial distinction between a viable fetus’ right to some protection under the law, and a constitutionally recognized person.