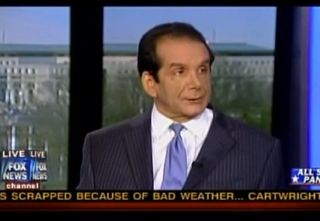 Some may suggest that Donald Trump has managed to keep the news cycle in a stranglehold for the past month or so based solely on “trainwreck” shock value, but these are the moments that defy that thesis: after Fox News commentator Charles Krauthammer complained of Trump’s destructive, “vulgar” tendencies and compared him to Al Sharpton, Trump took the time to make his case as a serious candidate to Krauthammer in a personal phone call.

Talk about caring about your constituency. Krauthammer told the amusing story on Fox’s Special Report today, joking that upon hearing Trump was on the line “put on my helmet” and expected the worst. Instead, Krauthammer explained, Trump merely reached out to make his case personally on why he is dead set on running, and is a serious contender:

It was a surprise, and when my secretary told me, I put on a helmet and a flak jacket as I answered the phone. I expected a tirade, which he had every right to do given what I have been saying about him. In fact, he was courteous but very calm, and he made his case, rather than sort of attacking everything I said about him. Simply, he made his case: “I’m a serious businessman, I’m a serious candidate.”

Krauthammer added that they had “a few exchanges” on matters such as China, Iraq, and “the birther issue,” but that “the tone was no worse than Juan [Williams] and me on a normal day.” Krauthammer appeared impressed and said as much, adding that he found the call so sincere that “at the end I felt that I ought to tell him that my column, coming out tomorrow, is even worse that what I have been saying on television.”

Furthermore, Krauthammer now believes that Trump is “absolutely” running for President, otherwise he would not have attempted to make a calm case for his campaign, but “would have screamed and yelled and stomped” about it. “I give him credit the way he handled himself,” Krauthammer added, though he did not sound like he was ready to pull that lever just yet. That said, if Trump is serious about that presidential bid, ingenious political moves like this are a surefire way to make his case. If he knows and understands the power of the media, understands conservative circles to realize just how formidable an enemy Charles Krauthammer can be, and can make his case strongly enough where luminaries like Krauthammer suddenly find it difficult to laugh at him, Trump may legitimately give the rest of the field a run for its money.