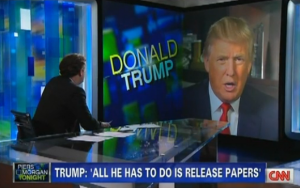 On Wednesday night, Donald Trump joined Piers Morgan to talk about his recent offer to donate $5 million to any charity of President Barack Obama‘s choice, provided that Obama reveals his college records, passport application, etc. While Morgan insisted it’s an offer Obama will most assuredly refuse, Trump argued it’s for a good cause — and he couldn’t imagine why the president would pass that up.

Asked about the backlash to his announcement, Trump denied any such thing, saying, “I’ve had tremendous praise for the most part.” He went on to say that all Obama has to do is release records which other candidates in the past have done.

We both know he’s never going to, Morgan said — a point Trump immediately refuted. “I think he will,” Trump said. “I hope he will.” It would make him “very, very happy.” The question, he added, is why wouldn’t Obama accept the offer? After all, $5 million is a lot of money.

Morgan then noted Frank Rich‘s tweet today that included a related offer of sorts: “See Trump’s $5M and double it: $10M donation to Mitt’s favorite charity (we know what it is) if he releases all tax returns.”

“I can’t imagine that for $5 million that he wouldn’t do it,” Trump said.

He then offered another proposal: a swap. College records for tax returns. Romney returns are “beautiful and perfect,” he said, so there’s no issue. “It’s a positive thing.”

He further argued against the notion that the whole thing is a publicity stunt. He doesn’t have to spend that kind of money, Trump said. “It’s a serious, very serious offer.”