Donald Trump Bows Out Of Debate: ‘I’m Not Willing To Give Up My Right To Run’ 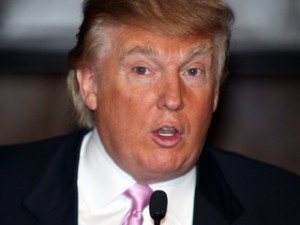 Donald Trump is dropping out as moderator of the December 27 Newsmax debate after all but two of the Republican presidential candidates declined the invitation to attend.

RELATED: Red Eye Panel: With Debate, Trump ‘Threw His Own Birthday Party And Nobody Showed Up’

Trump put out a press release explaining his position:

“The Republican Party candidates are very concerned that sometime after the final episode of The Apprentice, on May 20th, when the equal time provisions are no longer applicable to me, I will announce my candidacy for President of the United States as an Independent and that, unless I conclusively agree not to run as an Independent, they will not agree to attend or be a part of the Newsmax debate scheduled for December 27, 2011.

“It is very important to me that the right Republican candidate be chosen to defeat the failed and very destructive Obama Administration, but if that Republican, in my opinion, is not the right candidate, I am not willing to give up my right to run as an Independent candidate. Therefore, so that there is no conflict of interest within the Republican Party, I have decided not to be the moderator of the Newsmax debate. The American people are embarrassed by the gridlock currently taking place in Washington. I must leave all of my options open because, above all else, we must make America great again!

“I would like to thank Newt Gingrich and Rick Santorum for having the courage, conviction, and confidence to immediately accept being a part of the Newsmax debate. I believe this would not only have been the most watched debate, but also the most substantive and interesting debate!”