Donald Trump Fights Back: ‘Ron Paul Is A Joke’ And George Will Is ‘Third-Rate’ 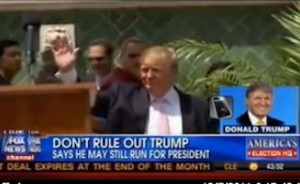 Donald Trump appeared today on his regularly scheduled Monday morning Fox and Friends segment and fought back against critics who have vocally railed against plans for the self-proclaimed billionaire and reality show television host to moderate a GOP debate sponsored by Newsmax, a conservative media outlet. A combative Trump specifically called out conservative columnist George Will, and continued his habit of insulting the presidential aspirations of Ron Paul, calling his campaign a joke.

There was almost an immediate backlash when news broke last Friday of Trump’s plans to moderate a debate. I wrote that no serious candidate should participate in a debate hosted by Trump, which would make a mockery out of an institution already low in credibility. Those thoughts were echoed by Will, who said on ABC News’ This Week that this was an opportunity “to do something presidential, stand up and say, ‘we’re not going to be hijacked and participate in this.”

When asked to opine on Will’s comments, Trump said:

I’ve read George Will over the years. He’s third-rate and makes so many wrong predictions and if you just follow the predictions, you’ll find out he shouldn’t be doing what he does. I didn’t read this. You’re telling me this for the first time. The fact is that they came to me and they asked me — very powerful group and some others came to me — and some major Republicans, and asked me if I’d do it. I think we’ll have tremendous viewership and probably get the highest ratings on the debate, which is important when you’re trying to get a message out and, you know, somebody said — I think it was Ron Paul — I’m a reality star and I shouldn’t do it. I’m not a reality star. What I am is a businessman who runs a business, a tremendous business, I write about it in the book and even disclose my financial numbers in the book for the first time… that nobody has ever seen before.

Ron Paul wasn’t the first candidate to openly proclaim that he wasn’t going to attend (that would be Jon Hunstman) but he did call participation in a Trump moderated debate “beneath the office of the Presidency.”

Trump and Paul supporters have a bit of a history; Trump famously told fans of the libertarian Texas Congressman that Paul had no chance of winning the presidency at a CPAC convention. When asked by Gretchen Carlson if he, “cared to continue the fight this morning?” Trump replied:

Thus far only Newt Gingrich has openly accepted an invitation to participate in Trump’s debate, though many believe that Michele Bachmann will follow suit, since she has suggested selecting Trump as a possible running mate. Whether or not other candidates will boldly decide to bow out, or participate in what many believe will be a charade of political discourse, remains to be seen.

Until then, watch the Fox and Friends segment below, courtesy of Fox News: