Donald Trump Finds His Calling as Final Judge on Stupidity

Donald Trump Finds His Calling as Final Judge on Stupidity 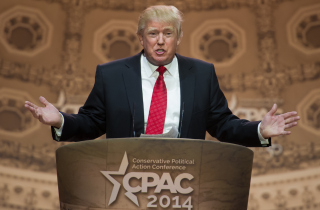 During the March 26th edition of Fox’s On the Record, Donald Trump called President Obama’s comments about concerns over a nuke in Manhattan “absolutely the dumbest — I guess I have to say one– but maybe I can say the single dumbest statement I have ever heard a president make.”

Of course, The Donald had probably just returned from his high-rise laboratory where he gauges stupidity based on the rate at which his fingers gravitate toward Greta Van Susteren’s contact information. Sigh, it’s hard to argue with science.

But let’s give it the old college try. Here are some presidential quotes that out-dumb President Obama’s attempt to articulate his genuine fears concerning homeland security:

Of course, dumb comments aren’t just silly, as Trump implies. How about quotes with grave and aloof implications:

Now, Trump made no distinction between countries either, saying “I don’t mean just the president of this country.” There really only needs to be one example here (with apologies to Chávez and Putin):

Hmmm, let’s finish off this experiment with American business moguls, shall we? Ah, what luck, we only need one for this too: