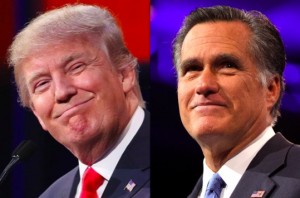 In an unprecedented move, former Massachusetts Governor Mitt Romney, who also locked up the Republican party nomination for President in 2012, will give a speech on the state of the 2016 race aimed squarely at the current frontrunner Donald Trump. Romney has often expressed his disapproval of Trump campaign tactics, and is hoping that an address to his base will convince voters to move away from the candidate currently polling in first.

It may prove to be a too-little-too-late move; Trump swept through the large majority of Super Tuesday states with victories, and many people are wondering who from the narrowing field of candidates can stop the real estate mogul. Romney will speak from the University of Utah’s Hinckley Institute of Politics Forum at 11:30 a.m. ET Thursday, and Trump Thursday morning took to his own favorite forum — Twitter — to preemptively blast the former Governor:

Failed candidate Mitt Romney,who ran one of the worst races in presidential history,is working with the establishment to bury a big “R” win!

I have brought millions of people into the Republican Party, while the Dems are going down. Establishment wants to kill this movement!

Why would the great people of Florida vote for a guy who, as a Senator, never even shows up to vote – worst record. Marco Rubio is a joke!

I am the only one who can beat Hillary Clinton. I am not a Mitt Romney, who doesn’t know how to win. Hillary wants no part of “Trump”

Why did Mitt Romney BEG me for my endorsement four years ago?

Mitt Romney is not expected to offer an official endorsement during his address Thursday, though his support for Florida Senator Marco Rubio has been long rumored. Romney, who first offered that Trump’s hidden tax information may contain a “bombshell” of sorts, has taken to Twitter himself in recent weeks to put Trump on blast as well:

Methinks the Donald doth protest too much. Show voters your back taxes, @realDonaldTrump. #WhatIsHeHiding

No legit reason @realDonaldTrump can’t release returns while being audited, but if scared, release earlier returns no longer under audit.

.@realDonaldTrump taxes for last 4+ years are still being audited. There are more #bombshells or he would release them.

A disqualifying & disgusting response by @realDonaldTrump to the KKK. His coddling of repugnant bigotry is not in the character of America.

Could Romney consider getting into the 2016 race this late in the game? It’s certainly not out of the question, especially as the GOP base is left scrambling for a response to the unexpected developments in the polls. A brokered convention in July in Cleveland, according to former Texas Governor Rick Perry, would be “a whole new ball game” for candidates looking to challenge Trump’s legitimacy, and Romney could certainly be one of the foremost contenders to press Trump after earning 61 million votes in the 2012 Presidential election.