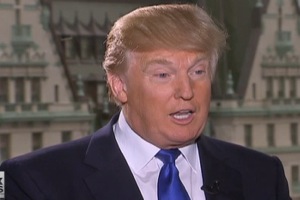 Donald Trump gave Greta Van Susteren a lengthy interview where he took on everyone from President Obama (of course) to Congressional Republicans and Mitt Romney. Trump declared, “this country is being abused, it’s being taken advantage of, and it’s being run by incompetent people,” and he wasn’t too optimistic about the ability of leaders in either party to change America’s future course.

Trump was not pleased with the resolution to the debt crisis:

If Trump was in charge, he vows, “I would have gotten rid of Obamacare… and I would have gotten much bigger cutting.” Instead he fears Republicans now “really launched Obama’s presidency” and lost an opportunity to guarantee Obama’s defeat in 2012. Something he clearly hopes for, since in Obama “we have probably the worst leader we’ve ever had, especially when it comes to rebuilding our once great country.”

And Trump is very disappointed with Romney, asserting “he’s missing in action” and “he should have been a big part of this negotiation.” In the final minute, Trump lightens the mood and turns a bit more optimistic as he admits he’s a big fan of both Sarah Palin and Michele Bachmann (taking a moment to mention that both women paid a visit to Trump in New York City, to kiss the hair, sort of speak). Yet in the final seconds, Trump returned right back to his overall message about the state of the country, warning “right now we’re a laughingstock.”