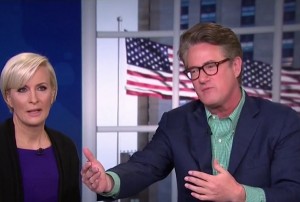 On Friday’s Morning Joe, the crew conducted a sprawling phoner with presumptive Republican presidential nominee Donald Trump that had everything you’d expect from a Donald Trump interview on Morning Joe, including some hilarious awkwardness. After co-host Willie Geist figured out what Trump has been saying for months, that his threat of a trade war with China is a negotiating tactic to force them to adopt trade practices that are more fair to the United States, host Joe Scarborough tried to do a bit where he pitches Trump’s trade stance direct to camera, but Trump wouldn’t let him get to the punchline:

Scarborough: Just so China knows, Donald is going o to put on like an 80% tariff.

Scarborough seems to miss the point that as president, threats like the ones Trump is issuing now to China can have effects beyond making China either quake in its boots or laugh, such as destabilizing world financial markets. Presidents’ words alone have power.

It’s a point that was also lost on co-host Mika Brzezinski, who picked the wrong thing to be disturbed by regarding Trump’s tweet jumping the gun in calling the missing Egyptian airliner a terror attack:

While Trump’s focus on hate and fear is a problem, it’s not the main problem with this tweet, which is once again an indication that a President Trump would react rashly and prematurely, without a thought to the consequences even of his words. For someone who campaigns on the claim that he opposed the Iraq War, Trump seems to not only be unconcerned with getting way out ahead of the facts, but to view it as a strength.