Donald Trump: ‘I Don’t Disagree With Verdict’ But George Zimmerman ‘Is Not Going To Heaven Very Quickly’
VIDEO

Donald Trump: ‘I Don’t Disagree With Verdict’ But George Zimmerman ‘Is Not Going To Heaven Very Quickly’ 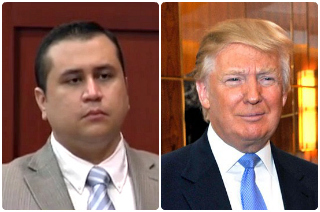 How did we make it a whole thirty-four hours without hearing what Donald Trump thinks about the George Zimmerman verdict?

Trump called in to Fox And Friends Monday morning, telling the trio of hosts that he thought Zimmerman was “no angel” and that he should high-tail it out of Florida, but that he also agreed with the verdict and questioned whether the case ever should have been brought given Florida’s tough self-defense statutes.

“Zimmerman is no angel,” Trump said. “I didn’t like the fact that Zimmerman was told to stay in his truck, don’t move, and he went out and he certainly moved. But he’s no angel, we know that, this is not a guy who doesn’t deserve certain blame.”

Gretchen Carlson said it sounded as if Trump doubted the jury’s acquittal.

“I don’t disagree with the verdict,” Trump said. “I just don’t think that Zimmerman is necessarily somebody who is going to heaven very quickly.”

Carlson asked what advice Trump had for Zimmerman as the “master of getting noticed,” as O.J. Simpson lawyer Alan Dershowitz was recommending that Zimmerman make himself scarce.

“It’s good for everybody if he disappears,” Trump said. “This has been really a traumatic verdict for the country. And actually hasn’t been as bad as a lot of people thought it would be. Now, we’re just beginning, let’s see what happens. But he should disappear, for his own sake, and for the country’s sake.”