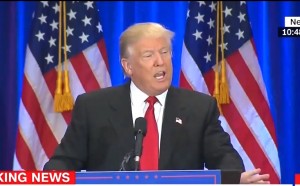 On Wednesday morning, presumptive Republican presidential nominee Donald Trump responded to Democratic rival Hillary Clinton‘s blistering attack speech with an address of his own, and he kicked it off with an explicit plea to supporters of independent Vermont Senator and Democratic presidential runner-up Bernie Sanders, who still has not conceded the nomination to Hillary. In the first minutes of his speech, Trump implored Sanders fans to join him in defeating Hillary Clinton, echoing the movement’s complaints about “rigged” elections:

The insiders wrote the rules of the game to keep themselves in power and in money. That’s why we’re asking Bernie Sanders voters to join our movement so together we can fix the system for all Americans. This includes fixing all of our many disastrous trade deals, and they are disastrous and destroying our country. Because it’s not just the political system that’s rigged, it’s the whole economy.

Trump gave Sanders another shout-out a few minutes later, echoing an attack line that the Vermont Senator used during his primary battle with Hillary Clinton:

Hillary Clinton wants to be president. But she doesn’t have the temperament and, or as Bernie Sanders said, very strongly, the judgment to be president. She does not have the judgment. She believes… she believes she’s entitled to the office. Her campaign slogan is “I’m with her.” You know what my response is to that? I’m with you, the American people.

Sanders has pledged to join the fight against Trump “in a very short period of time.”