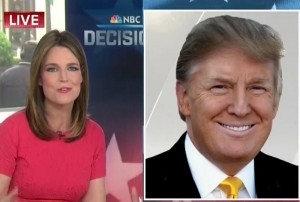 In what will probably be one of the least important yet weirdest subplots in the saga of Donald Trump‘s 2016 presidential run, The Washington Post has published quarter-century-old audio of an interview with someone claiming to be a Donald Trump PR flack named John Miller, but who sounds a lot like Trump himself. On Friday morning’s Today Show, Trump was confronted with a clip from that audio, and not only denied it was him, but lashed out at hosts Matt Lauer and Savannah Guthrie for even bringing it up:

Trump: Wow. You mean you are going so low as to talk about something that took place 25 years ago, about whether or not I made a phone call? I guess you’re saying under a presumed name.

Guthrie: Yes, under a presumed name.

Trump: Okay. The answer is no. Let’s get on to more current subjects. I know it’s wonderful for your listeners, but we have more important things to discuss.

The Today Show played a few seconds of the audio, but WaPo has about 14 minutes of audio that you can listen to here, and for your own comparison, here is a randomly-selected clip of the real Donald Trump at a 1991 House hearing talking about raising taxes on the wealthy:

As WaPo points, out, though, it’s not just reporters who claim Trump impersonated his own publicist, but Trump himself (from an old People Magazine article)

Just two weeks ago, though, Ms. Maples was not even taking The Donald’s calls. Not after a PEOPLE reporter played her a tape on June 26 of a man saying that he was a Trump publicist named John Miller. A shocked, devastated Marla identified the voice as that of Trump himself. He announced, among other things, that he’d traded in his Georgia peach for an Italian model (Carla Bruni). “When I heard his voice on that tape saying those things, I said, ‘Whoa! Uh-uh. No more,’ ” says Marla. “If he could say all that stuff and act like it’s cool to have this playboy image, then oh my gosh, all I could say was, ‘Baby, you’re on your own.’ ”

..Meanwhile a penitent Don Juan-ald had come to the opposite conclusion. The John Miller fiasco he called a joke gone awry. “What I did became a good time at Mar-la’s expense, and I’m very sorry,” says the newly humbled tycoon. As for his wandering eye, “I’d felt that I needed space and freedom after the divorce, so I took the opportunity to go out with other women, but I kept coming back to Marla. I realized, why go looking for something when you already have exactly what you want?”

It might seem unlikely now, given Trump’s Teflon durability to this point, but this sort of thing has the potential to damage him in a general election context, where his core appeal isn’t so strong and the electorate not so worshipful. The last time his poll numbers went down in flames, it wasn’t over policy or controversial bombast, it was from being turned into a punchline.