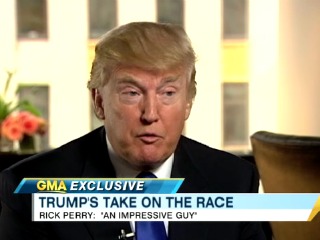 Donald Trump (“The Donald”) managed to the the topic of a national (media) obsession earlier this year when he hinted that he might possibly perhaps consider running for president as a potential GOP candidate. Now, he’s got the rumor mill churning again with chatter that he may yet run — as a 3rd party candidate. In an interview with Good Morning America‘s George Stephanopoulos, Trump hinted (again) that he “might” run with a 3rd party should Republicans not choose the “right” candidate. Stephanopoulos wondered what that meant, and went down the list of front-runners to see how Trump felt about each. As it turned out, if Trump hasn’t met you in person, he can’t possibly consider voting for you (a common thread throughout the interview whenever Stephanopoulos mentions a politician’s name):

GEORGE STEPHANOPOULOS: How about Mitt Romney?

Nobody seems to know the man who won the Iowa straw poll in 2007.

Stephanopoulos went on to ask the reality show host and businessman about his position on various hot issues, eventually asking the man whose brand is essentially built on the image of him as a very wealthy person what he thought of recent statement Warren Buffett made about raising taxes for the super wealthy rather than “coddling” them:

GEORGE STEPHANOPOULOS: Let’s talk about taxes. Warren Buffet made another splash with his op-ed in the New York Times saying it’s just not right that he, a billionaire, pays 17 percent in taxes when his secretary and receptionist pay more. Isn’t he right about that?

DONALD TRUMP: Well, I’ll tell you something. I view it — there’s many different views on that. And I can also tell you that a lot of people will go elsewhere to do business if you start taxing them. Many, many people, and I know people and I deal with —

GEORGE STEPHANOPOULOS: But 17 percent isn’t much for a billionaire.

GEORGE STEPHANOPOULOS: That didn’t happen during the Clinton years. And the– if we just go back to that, those rates.

DONALD TRUMP: And times have also changed. But if you go back to certain companies, Exxon Mobil, the oil companies, for us to be subsidizing oil companies is absolutely insane. And frankly, the oil companies really facilitate OPEC. The worst abuser we have is OPEC. And the biggest problem this country has, China’s a big problem, but OPEC’s even worse.

So, will Trump run? For now, it seems his official answer is “I’m going to see.”

Have a look at video of the interview, courtesy of ABC: