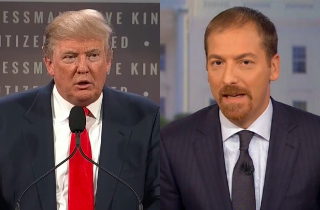 After Trump spoke at this past weekend’s Iowa Freedom Summit, Todd remarked, “Nobody’s going to mistake Donald Trump for a presidential candidate, I don’t think, other than Donald Trump.”

On Sunday, Trump went on an impassioned Twitter tirade against Todd, whose show appears on the same network as The Celebrity Apprentice, dubbing him #SleepyEyes:

Word is that @NBCNews is firing sleepy eyes Chuck Todd in that his ratings on Meet the Press are setting record lows. He's a real loser!

"@tarheels31: @realDonaldTrump @NBCNews outside of the apprentice, hardly anyone watches the obama network… aka @nbc"

"@bgoudyGCC: @realDonaldTrump @NBCNews Can't wait to see #SleepyEyes on the next #CelebrityApprentice. Oh wait, he would have to be a celeb

I am convinced that sleepy eyes Chuck Todd was only a placeholder for someone else at Meet the Press. He bombed, franchise in ruins! @nbc

So many people have told me that I should host Meet the Press and replace the moron who is on now. Just too busy, especially next 10 years!

Watch video of Todd’s comments below, via NBC: