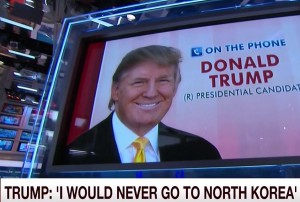 Presumptive Republican presidential nominee Donald Trump made news this week when he said that he would be willing to meet with North Korean dictator Kim Jong-Un if elected president. On Friday’s Morning Joe, however, Trump drew the line at ever going to North Korea. As host Joe Scarborough tried to make an unfavorable comparison between Trump and two-term incumbent President Barack Obama, Trump jumped all over him for saying Trump was willing to go to North Korea, then challenged Scarborough’s assertion that he had attacked Great Britain:

Scarborough: This past week a lot of people confused because you’re talking like Obama saying you would go to North Korea, and you’d talk to the North Koreans…

Scarborough: You would talk to them.

Trump: The last thing I would do is go there. I don’t know who would say I would go there.

Trump: Yes, I would.

Scarborough: Maybe he can go to your resort in Scotland.

That’s a distinction without a difference to Trump’s detractors, who view any direct engagement with North Korea as foreign policy heresy.

As for Trump’s “invitation” to Prime Minister David Cameron‘s 10 Downing Street residence, the British press reported this week that the British government is preparing for the possibility that Trump could visit in July after he’s officially nominated:

However, if he decided to visit Britain after the Republican convention in Cleveland, Ohio, towards the end of July, then protocol would change if, as isnow widely expected, the tycoon became the official Republican presidential nominee.

The billionaire businessman would be expected to be offered meetings not only with the Prime Minister but also with Jeremy Corbyn, Leader of the Opposition.