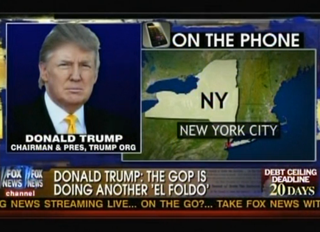 During the brief period in which Donald Trump somehow became the Republican frontrunner in the 2012 race, many considered his greatest strength to be his reputation as a formidable businessman and experience managing money. Naturally, this meant he had quite a few things to say about the current budget debate in Congress, but despite his disapproval of President Obama, most of his criticism was focused on the “scared” Republicans who he chided for “folding.”

On last night’s On the Record, Trump expressed his frustration with the “terrible negotiators” in the Republican Party, who, he told Greta van Susteren, were “making Obama look so great it’s incredible,” because “it looks as if they’re folding,” both on raising the debt ceiling as well as other concessions. Trump noted the negotiations were a triumph for Democrats, and joked that “Nancy Pelosi is laughing all the way to the bank.” Asked what he would do differently, Trump answered that he would “make a final and conclusive deal,” rather than continue to negotiate piecemeal.

As with every Trump interview, van Susteren did not waste the opportunity to ask where Trump was in the long road to determining a presidential run. He gave no new information, other than to say that he was going to “see what happens with the Republicans, and I’m going to see what happens with the economy” before deciding whether to step in as an independent presidential candidate or not. Standing in the way of Trump 2012? “I love my life,” he admitted, “I love what I’m doing,” and among the things he loves about his life? “the front page of the Wall Street Journal saying I’m an intelligent person.”