Donald Trump On Iraq Oil: America Should Take It, ‘To The Victor Belongs The Spoils’ 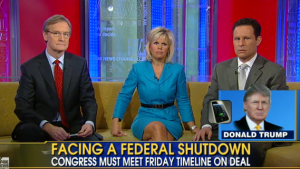 In the brand new “Mondays with Trump” segment of Fox & Friends, potential Republican candidate for President and consistent headline seeker Donald Trump called in and shared his thoughts on the latest topics in the news. Proving that anything goes in the segment, Trump discussed everything from promoting Celebrity Apprentice in one moment, to his plans for Iraqi oil in the next.

Trump spoke highly about Republicans Paul Ryan and John Boehner and their efforts to get the federal budget under control. Yet on a lighter and more entertaining note, Trump commented on reports that Oprah Winfrey desires having him as a guest for a makeover on one of her last shows. Trump joked, “I’m worried about a sinister plot. The plot is that Oprah supported Obama, maybe she wants to give me a makeover so that I would not have even a minor chance against Obama.”

Also Trump really enjoyed appearing with Bill O’Reilly last week, saying he received “an amazing response from the O’Reilly show, it’s probably the biggest show he’s ever done in the sense of three fairly full nights of me, and he was very happy, as he will tell you his ratings were phenonmenal.” Gretchen Carlson couldn’t help but let out a chuckle at Trump’s unabashed promotion. Finally Trump didn’t back down from earlier statements on Iraq, suggesting American soldiers will have died in vain if we leave Iraq and let Iran go and take the oil fields, instead of us as the victors getting the spoils.