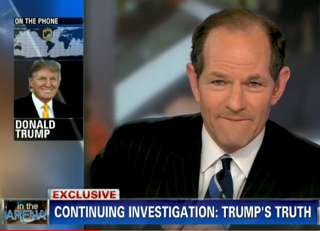 While other potential presidential candidates are doing their best to ingratiate themselves with the general American public, Donald Trump has adopted the bizarre and profoundly entertaining strategy of calling up his detractors in the media individually and making them explain themselves. Yesterday’s victim was Eliot Spitzer, who had mocked Trump’s financial hyperbole, and was now presented with the task of doing so to Trump on national television.

Unlike, say, his private conversation with Charles Krauthammer, Trump called up In the Arena ready for battle– given Spitzer’s history in New York real estate, this is not the first time the pair engage. Trump did not take Spitzer’s orders to “fire away” lightly: “One or two people called me up and said it was a very unfair piece,” Trump noted of Spitzer’s initial investigative segment, immediately articulating his disappointment with Spitzer. “I was a fan of yours,” he lamented, “and I was a little bit surprised to see you do a negative piece.” Noting the disappointment, Spitzer replied that he was still “a fan” and that “I love the bravado,” and ceded that, since Trump’s is a private company, much of his work was speculative.

Trump chipped away from there. “You don’t know where I come from or what I own,” he noted, and corrected his initial claims that his net worth had been valued by several banks to be billions of dollars lower that what Trump had boasted. Rather than Deutsche and North Folk Banks claiming Trump had “only” $750 million in net worth, as Spitzer claimed, Trump argued that this was a threshhold worth he had to meet in order to arrive at loans, such that the valuations were made with no real intent to chronicle his full worth. “This is many years ago… you had to have a net worth of over a certain amount in order to do a loan,” he explained. “Once the loan amount was hit, it didn’t make any difference what it was.”

Spitzer was unconvinced, but by the second and third times he tried to get Trump to admit the banks had valued him at significantly less than he boasted, the answers out of Trump were new boasts, like “I have built a great company” and “you’re wasting a lot of time on your show” with something that “you’ll find out, very likely soon.” Exasperated, Spitzer got straight to the point: “what is your net worth?” Trump wouldn’t say, but claimed it was “substantially in excess” of Forbes‘ estimate: $2.7 billion.

Spitzer’s confrontation with Trump via CNN below: