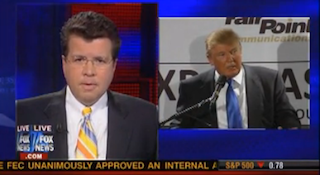 Today on Your World, Neil Cavuto got a call from Donald Trump to discuss the craziness going on with the markets, the likes of which Trump said he’d never seen before. The Apprentice-star blamed the volatile movement of the past couple days on a “crisis of leadership” here in America, saying that he “wouldn’t be surprised” if another Democrat ran against President Obama in the upcoming primary.

Of course, yesterday he blamed the market on Obama having a birthday so, grain of salt, I suppose.

“Well, I don’t think anybody can be [a fan of how the President’s handling things]. I haven’t heard anybody- even his biggest allies are not fans so much anymore. I actually wouldn’t be that surprised if you saw a nice liberal move to run against him in the primaries. I would not be at all surprised if somebody on the liberal side of things, the liberal side of the world decided to run against him. I mean, think of it from their standpoint. It doesn’t happen to be my persuasion but think of it. He’s got us in these wars, he stayed in them, he was going to get us out right away and we’re in there worse than we ever were. Just from that one element, if I’m a liberal, I’m saying ‘Let’s run against this guy in the primary.'”

There’s some truth there but, really, it seems pretty darn unlikely to me that there would be any serious liberal campaign against Obama. Then again, Trump is definitely working on a different level than I am. I know that sounds like I’m being sarcastic but I’m not. The fact was thrown into harsh relief later in the clip when Trump discussed buying “golf clubs” and there were a few seconds where I thought he meant the things you use to hit the balls, not the actual country clubs themselves.