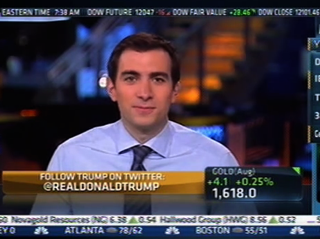 Donald Trump appears to be tiring a little bit of the constant scrutiny over his stance on President Obama’s birth certificate. During his regular “Trump Tuesday” segment on Squawk Box this morning, Andrew Ross Sorkin challenged Trump over comments by Mitt Romney disassociating himself from the birther issue, to which Trump replied that he was never the one to bring up the topic.

RELATED: Trump On Birtherism: ‘How Can I Be Racist, I Just Picked Arsenio Hall!’

After plenty of chat from everything to Wisconsin Governor Scott Walker to the shrubbery lining the Univisión studios (really), Sorkin jumped in with a question about the one issue Trump seems unable to avoid, highlighting an interview with Mitt Romney on CNBC where he made clear that he disagreed with Trump on this issue and thought there were more important things to talk about. Trump responded in kind, explaining that “there are a lot of people that look at the numbers and look at the facts and disagree, and they have a right to disagree and that’s what this country is all about.” He did not specify what “numbers” those who believed the President wasn’t born here are looking at, but cited as an example that “President Obama wrote it himself in his book, as you know, that was going to be published an the publisher was putting out, that was not put out.”

At this point the entire panel jumped on him to make the point that the issue was recognized as a misprint and this was a non-issue, with Sorkin adding the key fact that Romney himself is “out there saying this isn’t an issue.” Trump did not mind that Romney did that– in fact, he said “I think it’s great because he wants to talk about jobs,” and noted that he too wanted to talk about jobs. “I never talk about [the birth issue], but you bring it up,” he told Sorkin. “We were talking about houses in Palm Beach, we were talking about Scott Walker, and then all of a sudden this thing gets brought up… every time I’m interviewed, this thing comes up and then it becomes national headlines,” he lamented, accepting that “from the press standpoint they love that issue.”

The segment via CNBC below: