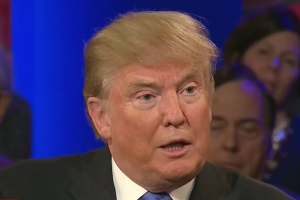 All politicians of all political stripes flip-flop at some point in their career. But Donald Trump may be the first politician to flip-flop only seconds after taking his initial position.

“In your opinion, what are the top three functions of the United States government?” a town hall participant asked Trump at Tuesday’s CNN town hall.

TRUMP: Those are two of the things. Yeah, sure. I mean, there are obviously many things, housing, providing great neighborhoods…

COOPER: Aren’t you against the federal government’s involvement in education? Don’t you want it to devolve to states?

TRUMP: I want it to go to states, yeah. Absolutely.

When pressed further by Cooper, Trump clarified his stance. But his explanation was somewhat incoherent: “The federal government, but the concept of the country is the concept that we have to have education within the country, and we have to get rid of Common Core and it should be brought to the state level.”