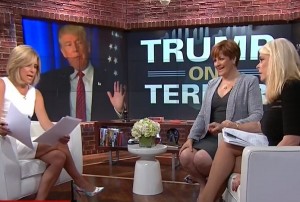 The 2016 presidential campaign has become something of a hardship for fact-checkers, but it’s always good to see ordinary journalists doing their part to rein in the falsehoods of candidates and their spokespeople. For example, on Tuesday morning, CNN New Day co-anchor Alisyn Camerota repeatedly caught Donald Trump campaign surrogate and former New York Lieutenant Governor Betsy McCaughey with her hand in the factual cookie jar as McCaughey tried to gin up hysteria about Syrian refugees and rape.

You might remember McCaughey as one of the key figures fighting against health care reform, but she has moved on to become a late addition to Donald Trump’s Steve-heavy economic team, but was on CNN this morning trying to warn of a throng of Muslim rapists headed for our shores, presumably to join all the Mexican ones. She told Camerota and Hillary Clinton surrogate Christine Quinn that Hillary wants to bring in 600,000 Syrian refugees to gang-rape everyone, and that FBI Director James Comey backs up McCaughey’s fears. Camerota and Quinn had to rein her in:

Camerota: Let me stop you on the James Comey one. We have the quote from him right here. “There is some risk of bringing anyone from the outside especially from a conflict zone. I think we developed an effective way to touch all of the databases and resources to figure out what we know about these individuals.”

McCaughey: That is a distortion.

Camerota: I’m quoting it. This is a direct quote. He says “I don’t think it’s a cumbersome process. My concern is that there are certain gaps.”

As a matter of fact, the quote that McCaughey tried to use was actually about what will happen once ISIS is defeated on the battlefield, and had nothing to do with the US’ ability to vet refugees:

Hillary Clinton has, indeed, called for the U.S. to accept 65,000 Syrian refugees, but has also called for rigorous screening and vetting.