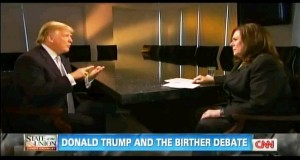 On Sunday’s State of the Union, CNN’s Candy Crowley became the latest interviewer to host Donald Trump‘s Magical Birth Certificate Mystery Tour®, and made an admirable attempt to get Trump to face facts. Over the course of a 10-minute interview that saw Trump swatting away at the truth like Birther King Kong, perhaps the funniest moment was Trump’s assertion that he doesn’t “like to talk about this issue too much,” which is a bit like Lou Bega saying he can’t stand performing Mambo No. 5.

Crowley did her level best to challenge Trump’s tenuous grasp of the facts surrounding President Obama’s birth, but like most conspiracy theorists, there’s no evidence too strong to ignore, or too weak to believe, as long as it supports your delusion. This contradiction is best summed up by Trump’s response when Crowley informs him that both newspapers that ran Obama’s birth announcement confirm that this information was provided to them by the hospital (not Obama’s grandparents, as Trump alleges): “Who knows? You’re talking 50 years ago.”

Crowley does a good job of challenging the Birther misinformation, but really, it’s an overwhelming task, and the lies she does call out (the COLB didn’t have a serial number, it doesn’t have the legal weight of a Birth Certificate, Obama’s grandmother claimed he was born in Kenya) are simply ignored by Trump and his disciples. As such. she can be forgiven for not catching all of them, including the answer to the question that Trump asks in every one of these interviews: why doesn’t President Obama produce the long form birth certificate?

Hawaii officials have repeatedly confirmed the existence of the record, but releasing the “long form” birth certificate is not an option, with or without President Obama’s consent, according to Hawaii’s Attorney General’s office:

Even Fukino accepts that her comments are not likely to end the matter for the die-hard birthers. Trump and other skeptics have questioned why the original birth certificate has not been released.

But Wisch, the spokesman for the attorney general’s office, said state law does not in fact permit the release of “vital records,” including an original “record of live birth” — even to the individual whose birth it records

“It’s a Department of Health record and it can’t be released to anybody,” he said. Nor do state laws have any provision that authorizes such records to be photocopied, Wisch said. If Obama wanted to personally visit the state health department, he would be permitted to inspect his birth record, Wisch said.