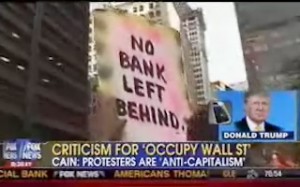 Donald Trump called into the set of Fox and Friends this morning for his weekly chat with the Fox News morning program and the discussion quickly turned to Occupy Wall Street. Trump surprised his hosts by telling them that he was not only in support of the populist movement, but that he was planning on camping out in Zucotti Park until campaign financing and the inequity of wealth was seriously addressed by both parties. KIDDING! What he really said was that “nobody knows what they’re protesting.” Shocker!

Fill-in Fox and Friends co-host Clayton Morris asked Trump what he made of the protest, to which Trump replied “I keep hearing different things and really very far flung things,” before suggesting that the real object of the protesters anger is….The White House (didn’t see that one coming, did you?)

Coverage of Occupy Wall Street has predictably followed the traditional partisan lines that viewers come to expect on the cable news spectrum. While MSNBC has seen a progressive answer to the Tea Party movement, many shows on Fox News have dismissed the protesters as confused and disorganized. And yes, while there has been a wide variety of issues brought up by individuals at Zucotti Park, it doesn’t take much effort to find a singular mission and source of frustration. Simply repeating the notion that protestors don’t know what they are protesting over and over again, does not make it true. And it further reveals that whoever is making such a claim, really hasn’t tried to find out.

Trump does cede a point to the protesters in his agreement that the very banks that received billions in Federal bailout dollars are not lending money to many of the American citizens who paid for the bailout. So maybe Trump does have an ounce of populism deep within his bourgeois soul? Probably not.