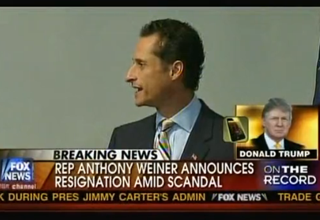 Donald Trump has maintained a regular stream of commentary on the Anthony Weiner situation since the scandal broke, and tonight he joined Greta van Susteren for a post-mortem of sorts on Weiner’s career. Calling the ordeal “a very sad situation,” Trump diagnosed Weiner’s behavior as “suicidal” and found little job opportunities in the former Congressman’s future, noting that “he’s not a lawyer [and] doesn’t have very many friends.”

Van Susteren began the discussion with the fact that Weiner chose to announce via press conference– a press conference marked as much by his comments as the vulgar heckling that met him in Brooklyn. Trump suggested that “he still has ambitions in a certain way” that would make facing the media a preferable situation, but that it “probably would’ve been better just sending out a memo.” Ultimately, he noted he found the whole thing bizarre and used his preferred phrase “death wish” to describe what could lead Weiner to “send out nude photos of himself to people he didn’t even know.”

“As far as a political future, you can write it off,” Trump concluded, adding that, “he’s not a lawyer, he doesn’t have very many friends,” so an alternate employment seems difficult. He praised his wife Huma Abedin as a “rational person” who probably had much to do with the resignation, and noted that he did see something “sleazier and sicker” to his photo scandal than an actual affair the type which many politicians are often caught participating in.