Donald Trump Wants to Bring Back ‘Something Beyond Waterboarding’ 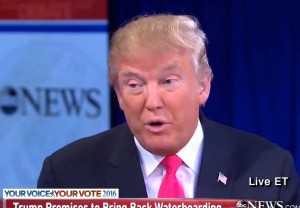 On Sunday morning’s This Week with George Stephanopoulos, Republican presidential frontrunner Donald trump expanded on remarks he made at Saturday night’s Republican presidential debate, telling George Stephanopoulos that he would “absolutely bring back waterboarding,” adding that “if it’s going to be tougher than waterboarding, I would bring that back, too.”

Trump spoke on the subject for several minutes, but never actually got specific about what form of torture he meant by “beyond waterboarding”:

STEPHANOPOULOS: As president, you would authorize torture?

TRUMP: I would absolutely authorize something beyond waterboarding. And believe me, it will be effective. If we need information, George, you have our enemy cutting heads off of Christians and plenty of others, by the hundreds, by the thousands.

STEPHANOPOULOS: Do we win by being more like them?

TRUMP: Yes. I’m sorry. You have to do it that way. And I’m not sure everybody agrees with me. I guess a lot of people don’t. We are living in a time that’s as evil as any time that there has ever been. You know, when I was a young man, I studied Medieval times. That’s what they did, they chopped off heads. That’s what we have…

It’s a safe bet that Trump wasn’t suggesting Bed or Bath to go beyond waterboarding, but so far, no one has been able to pin him down on just how far short of beheadings he’d be willing to stop.