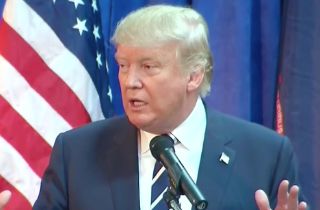 Donald Trump has been mostly focused on policy today, but when pressed on specifics in Michigan today, he deferred and made an argument for “flexibility” instead.

A reporter told Trump that while he’s bragged about all the issues he’ll be great on, people want to know specifics, like what he’ll replace Obamacare with or how specifically he’ll deal with China or bring jobs.

When asked “where’s the plan?” Trump said, “I think you’re going to see lots of plans… When you’re coming up with a plan in business, you have to be flexible.”

As evidence, he cited how he got a golf resort in Miami not with a “12-point plan,” but by “beat[ing] the hell out of people” to get it before any other interested bidders could.

So in other words, Trump will not be giving any specific policy proposals on the campaign trail because he wants flexibility. The reporter shot back, “Now you’re just asking people to trust you.”

Trump said, “There actually does have to be a trust. If you don’t trust, you’re not going to do very well.”