Donald Trump Won’t Rule Out Third Party Presidential Run: ‘It Would Have To Be A Very Rich Person’ 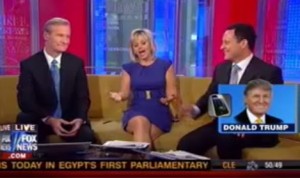 Donald Trump phoned in to Fox and Friends Monday morning, and hit on a litany of topics, from Newt Gingrich‘s immigration plan to Katie Couric possibly thinking he was hot. But Trump’s best bit came when discussing how a third-party candidate could enter the race and possibly steal a win in November’s presidential election.

Trump didn’t rule out a third-party run, but he didn’t say he would do it, either. When pressed, he gave a list of characteristics that a viable third-party candidate would have to have. They conveniently happened to line up with his own self-image:

“It would have to be, probably, a very rich person, because third parties don’t raise lots of money, because there’s not enough time to do it and a lot of other reasons.”

“There is so much dislike — and let’s call it hatred — for the Republicans and the Democrats, I really believe a very smart and very well-equipped third-party candidate, at a minimum, could do really well.”

Trump stopped short of saying that he could be that person, but this “friend” of his seemed very similar, characteristic-wise, to the host of Celebrity Apprentice. To Trump’s credit, he seemed to not view this entirely as a publicity stunt, at least understanding the catastrophic effects of what a third-party candidate could do to a race this tight. “President Clinton got very lucky with what happened with Ross Perot,” Trump said. “Let’s not kid ourselves.”

Still, the hosts of Fox and Friends persisted, reminding Trump that he talked in the past about running for president. and has plenty of money. “Remember this: Ross Perot got 18% of the vote and he imploded. He totally imploded. Before he imploded, he was at 34 and 35 percent. He was actually leading,” Trump explained. “I think the right person could absolutely at least come close to winning and maybe win. It’s not going to be easy. A third party is very, very tough.”

After hinting that some liberals unhappy with President Obama have quietly been feeling out runs as third-party candidates, Trump eventually came to the conclusion that a third-party run by a conservative might not be the best idea. “It would assure Obama’s re-election,” he said, “and that would be a disaster.”

Watch the entire clip of Trump’s interview below, courtesy of Fox: