Donna Brazile: ‘Cain Train Will Continue To Make Stops But Fewer Passengers Will Get On Board’
video

Donna Brazile: ‘Cain Train Will Continue To Make Stops But Fewer Passengers Will Get On Board’ 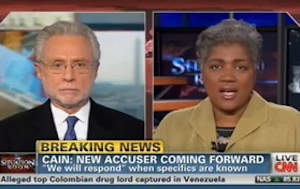 CNN contributor Donna Brazile predicted the salacious new allegations against Herman Cain of an adulterous affair with Ginger White would severely impact the former Godfather Pizza CEO’s chances at the nomination. The Situation Room‘s Wolf Blitzer asked the Democratic strategist if he could survive the latest accusations. “The Herman Cain train will continue to make stops all along the country but fewer and fewer passengers will get on board,” Brazile said. “They clearly don’t want to be on a rocky train ride with someone with an unproven record and people don’t really know who the real Herman Cain is. The American people will forgive, but they won’t forget.”

Mary Matalin thought the Republican candidate’s campaign would still be salvageable, but only if he was telling the truth. “I think adultery and infidelity, voters tend to be on occasion more forgiving…(but) lying like that, if it is, that’s why I think he can’t possibly be lying. That would be a character flaw — if you could look somebody straight in the eye and lie. That’s a problem,” said Matalin.

“I don’t believe this is an issue of race,” Brazile added, as Cain had suggested. “He’s had ample opportunities to set the record straight, I have to say something as a woman. How would you come forward knowing that your reputation, your family, your entire life will also be under scrutiny, I have to believe there’s a reason for her coming forward, and like most Americans, I want to know why.”