Donny Deustch: Are Moderate Whites Responsible For White Supremacists Too? 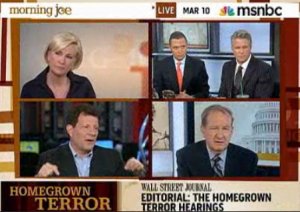 Republican Congressman Peter King begins his hearings today investigating the potential radicalization of Muslim Americans, but the Morning Joe panel is split on whether they should be taking place at all. In one corner is Donny Deutsch who thinks the hearings are “scary” and demonstrates the “extremism” of the Republican party and in the other corner is Pat Buchanan arguing the hearings are legitimate and any criticism should come only if and when the hearings are conducted in an unjust manner.

Also entering the fray was guest Nicholas Kristof from The New York Times, who was somewhere in the middle. Kristof argued the hearings were counterproductive since they created a perception worldwide for Muslims that they are targets. However, Kristof did not completely oppose the idea of hearings, suggesting, “if they were run by somebody who wasn’t perceived as an enemy of the Islamic community that would sure help.” Buchanan responded, “maybe Peter King is not the right guy, but . . . you cannot let political correctness deny you the ability to take a look at what is a serious and growing problem.”

Most passionate though was Deutsch, who sarcastically said “let’s talk to moderate whites and why are we not responsible for the white supremacists – this is scary.” Deutsch believed most Americans watching the news regarding King’s hearings will simply view it as “let’s put Muslims on trial” and for Deutsch, “that’s a scary thing and that causes hate and I think we’re going to see hate crimes as a result.” With Mika Brzezinski wondering whether critics of the hearings are suggesting the topic of Muslim radicalism can never be talked about and with Mike Barnicle asking why King focuses on Muslim extremists rather than homegrown terrorists of any background, the interesting debate allowed all involved to put forth their unique opinion.