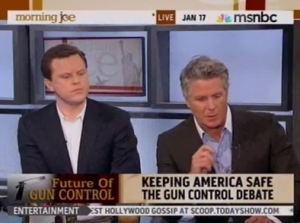 Rev. Al Sharpton was on Morning Joe this morning and, as with all of his television appearances, there was the potential that he would say something to infuriate half the country. However, it soon seemed like he wasn’t going to say anything too inflammatory, merely arguing that gun control is good and kids shouldn’t idolize gangsters. Fortunately, Donny Deutsch was there to help him out by suggesting that the “strange state” of Arizona should secede from the nation because they don’t celebrate MLK Day. That’s a weird thing to say considering no one wants a state to secede and also because they totally do celebrate it.

“We’re in the year 2011, we’re coming off the horrific, horrific event in Tucson. Yet, as we celebrate Dr. King’s Day, there’s still this very strange state of Arizona that does not recognize it. I mean, maybe is there a time for a shift here? Should they secede from the nation? With all that’s going on, it’s almost bizarre at this point.”

Now, Arizona was the last state to officially recognize Martin Luther King, Jr. Day and only did so after a boycott by the Super Bowl, which isn’t exactly a proud moment for the state. But they do recognize it. They call it “Martin Luther King, Jr./Civil Rights Day” and they’ve been celebrating it since 1992 so this seems like kind of an odd reason for a state to drop out of the country.

Perhaps there was something else Deutsch was referring to or maybe his clock was just set back 19 years. Either way, it was a really odd statement to make and one that appears to be 100% wrong. Not that you’d know from watching.