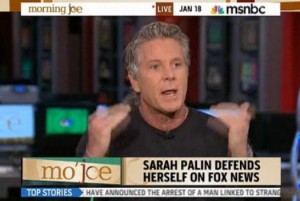 The Morning Joe team addressed Sarah Palin‘s interview with Sean Hannity last night, and still seemed confused by America’s fascination with the former Alaska Governor and current lightening rod for partisan politics. In a roundtable discussion, Donny Deutsch led off the conversation with a very interesting take: we are fascinated by Ms. Palin because she essentially has the same public persona as Snooki, only for a very different demographic. Hosts Mika Brzezinski and Joe Scarboroughquickly distanced themselves from Deutsch’s over-caffeinated comments, but he actually made an interesting point.

“Why the fascination (with Sarah Palin)? It’s very simple and I’m not going to be glib here. She is Snooki. It’s the same math. A younger generation they want to watch this character with big character with big hair who’s funny…you don’t know she’s going to say. It’s no different but for a higher demographic! We watch her she’s interesting looking..whats she going to say? She’s campy, she’s kitschy, it’s telegenic, its television, its entertaining that’s the fascination. Beginning, middle and end of story, she’s Snooki.”

Considering that Deutsch is a legendary ad man who has made a not-so-small fortune correctly divining public perception (and correctly calculating the “math” of public imagery), it is hard to argue with someone with such a successful legacy. Still, any discussion of Palin is so often fraught with controversy that its easy to see why the rest of the round table effectively hid under the table after the provocative comments. More Editor in Chief Leslie Jane Seymour made a compelling rejoinder, claiming that the fact that Palin will not be silenced is part of the appeal to so many of her fans. Watch the clip courtesy of MSNBC.com below: