Donny Deutsch ‘Knows’ Private Equity Guys: Their Goal Is To ‘Take Their Money And Run’
Video

Donny Deutsch ‘Knows’ Private Equity Guys: Their Goal Is To ‘Take Their Money And Run’ 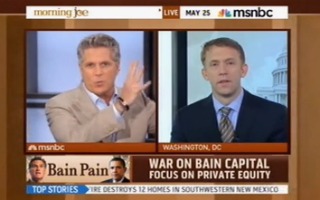 On Friday morning, the folks at Morning Joe invited on Joshua Green to discuss his Bloomberg Businessweek piece on “Obama’s Bogus War on Bain.”

In it, he writes he following:

Still, it’s odd to see private equity suddenly elevated to a pivotal national issue. “This is not a distraction,” Obama insisted on Monday. “This is what this campaign is going to be about.”

The reason it’s odd is that Obama has given no prior indication of being troubled by the industry’s practices or made any obvious attempt to change them. Private equity didn’t factor in the 2010 Dodd-Frank banking reform law, nor does it pose enough of a threat to worry financial reformers today.

“It’s not yet clear what effect Obama’s attacks will have,” the article concludes. “But his own views about private equity seem much more benign than those of his advisers. On the same day that his ad rolled out, Obama attended a fundraiser in New York City—hosted by a prominent private equity executive.”

Donny Deutsch shared that, as he sees it, Barack Obama is not so much attacking private equity as he’s attempting to paint Mitt Romney as a “rich, disconnected guy to the average guy.”

“I’d change that only slightly,” responded Green. “If you talk to Obama’s advisers — and they hold a lot of press calls with reporters to try and guide our thinking about this sort of thing — the buzz word you hear again and again from them is ‘values.’ And the argument they’re making is this isn’t so much a business issue as a values issue. If you look at this issue, if you look at the ads and the bankruptcies and the layoffs, that’s really what they want to staple to Mitt Romney. They want to discredit his business career so that voters don’t think to themselves, ‘gee, the economy isn’t as strong as I’d like. This business guy seems to know what he’s doing. I think I’m going to vote for him.'”

Host Joe Scarborough thought the President was “walking a tightrope” when it comes to potentially alienating donors and supporters working in private equity, while Mika Brzezinski wanted more insight into what, exactly, the Obama campaign is trying to say about private equity.

“What they are basically saying,” explained Green, “is that if you look closely at Mitt Romney and what his skills are, you know, they are really not admirable skills. You know, making money — they refer to him as a ‘corporate buyout specialist’ and try and make it sound as kind of Wall Street and nefarious as they can. But then on the other hand, Obama has come out and said as he did in a press conference on Monday, ‘hey, you know, I think private equity plays an important role in the economy.’ So I think there’s an element of trying to have it both ways here.”

Deutsch, meanwhile, had a very set impression of what it is that those working in private equity set out to do. “I’m going to say something about private equity and hedge funds,” he announced. “And I still agree it’s a bad strategic move for Obama, but in reality, the guys that run those businesses are different than the guys who — than a guy who starts Starbucks. these guys, it is about skimming a dollar whether a job is created or a job is destroyed. It’s their mindset. They are not builders by nature.”

Scarborough argued that the phrase “skimming a dollar” has negative connotations, and could instead be seen as boosting the efficiency of a company and that “skimming a dollar” would actually prove counter-productive for someone working in venture capitalism.

“I know these guys,” Deutsch insisted, adding that their goal is not to build companies, but to “do what they can in the short-term to take their money and run.”