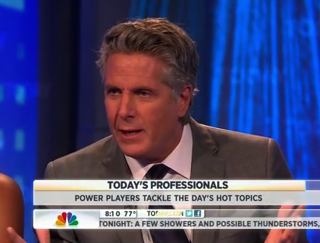 Chris Hayes’ comments on the military and the use of the word “hero” prompted a formidable wave of criticism his way, though not all of it necessarily related to what he actually said. On Today this morning, Matt Lauer‘s current events panel took a swing at the comments for which Hayes apologized. The panel universally condemned the comments, with Donny Deutsch proclaiming that the comment was particularly egregious given that Hayes “looks like a weenie.”

Lauer summarized the mini-scandal– Hayes questioned the overuse of the term “heroes” to promote a war culture– and read both his original statement and apology. The panel then tore into Hayes for his lack of respect for the troops. “I’m repulsed; I hope that he doesn’t get more viewers as a result of this,” Deutsch argued. “By the way, this guy, if you see what he looks like, he looks like a weenie,” Deutsch added, while the graphics team helpfully put up a photo of Hayes, for the audience to decide for themselves. “These guys are heroes,” he concluded, “I don’t know what the other side of this argument is.”

Star Jones agreed, noting that the person on the panel across from Hayes on Up was an officer “whose job it is to call the families” when their family member has been killed in action. “Could you be more inappropriate on Memorial Day?” Lauer added that “he wasn’t criticizing the men and women,” only “saying the word is overused,” but the panel didn’t seem to find that helped Hayes’ argument at all.