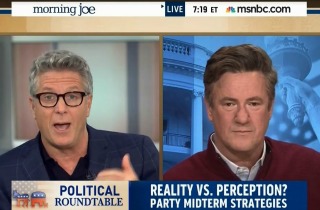 The hosts and guests of MSNBC took a look at the political landscape heading into the 2014 political season and concluded that Republican message appears increasingly attractive to voters. MSNBC contributor Donny Deutsch observed that the Republican’s anti-Barack Obama message of “change,” with a focus on the issues of the Affordable Care Act and a resurgent Russia, is virtually “unbeatable.”

Host Mika Brzezinski opened the segment by praising the president’s cautious approach to Vladimir Putin’s aggressive actions in Ukraine. She noted that Eurasia scholars agree with Obama’s approach, and Republicans’ criticisms have been unfounded.

“That’s the logical, left brain approach,” Deutsch countered. He said there is the perception that the Republican’s multi-pronged message, centered on “too much government,” a lack of a “strong” leader, and a “time for change,” is going to resonate with the midterm electorate.

Brzezinski asserted that the GOP’s approach to affairs consists of being needlessly confrontational with “madmen” and precipitating a “health care crisis.”

“You have the visceral, which is ‘not a strong leader.’ You have the proof-point, which is ‘too much government, Obamacare,’ and you have permission to believe – which is an advertising term – ‘time for a change,’” Deutsch said. “Those three pillars I actually think are unbeatable.

Scarborough countered that the message of “hope and change” is not new. “It’s what elected Barack Obama when they sold him like a bag of potato chips,” he said.