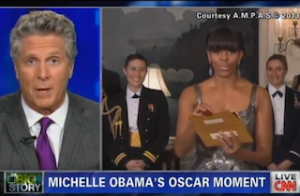 Piers Morgan continued a discussion tonight that had been brewing all day Monday about the implications of First Lady Michelle Obama‘s surprise appearance at the Oscars. Morgan’s guest Donny Deutsch, who refers to himself as a “liberal,” went even further than Bill O’Reilly in sharing his distaste for what he referred to as the “uninvited guest.”

Deutsch made the point that when someone in Michelle Obama’s position appears on Late Night with Jimmy Fallon, as she also did last week, the viewer gets to make the choice to tune in or not. But when she shows up at the most important moment during one of the most-watched television specials of the year, it’s an “intrusion” of politics that the viewer didn’t ask for. On top of that, he felt her appearance from the White House with members of the Marines standing behind her had a “monarch quality” to it that he found “tone deaf.”

Morgan brought in Jodi Kantor, who covers the Obama White House for The New York Times, to help explain the “charm offensive” strategy behind the first lady’s media appearances. But Deutsch, who pointed out he was working for President Bill Clinton when he went on The Arsenio Hall Show, wasn’t buying it.

He continued to push his premise that the first lady looked too “regal” on screen, at which point the only Brit in the room, Piers Morgan, had to jump in. “She wasn’t standing there ‘regally,'” Morgan said. “She’s not a queen. She’s standing in the White House with the Marines who work in the White House.” Morgan admitted that he saw nothing wrong with the appearance and didn’t see what all the fuss was about. He even went so far as to say the Oscars could be a step towards the first lady pursuing a political career of her own.

“If she ever does that,” Kantor responded, “I will come back on your show and I will physically eat my book one page at a time.”