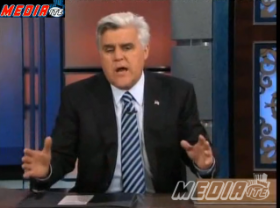 Again, just to be clear: Jay Leno would like you to know that this is not his fault.

Here’s what Leno would like you to know: He doesn’t have an agent or a manager — a handshake is all right by him. His version of the Tonight Show was #1 when NBC asked him to step down, and when he left. Every time NBC asks him to do something, he says sure. Also, everything that has happened over the past five years has been NBC’s idea. As for Conan O’Brien, he’s a good guy, a decent guy, they always go along great. However, Conan O’Brien’s Tonight Show was not #1.

That’s the short version of Leno’s speech. The long version is below – the video first, then the transcript to follow:

I thought maybe I should address this. At least give you my view of what has been going on here at NBC. Oh, let’s start in 2004. 2004 I’m sitting in my office, an NBC executive comes in and says to me, listen, Conan O’Brien has gotten offers from other networks. We don’t want him to go, so we’re going to give him ‘The Tonight Show.’ I said, ‘Well, I’ve been number one for 12 years.’ They said, ‘We know that, but we don’t think you can sustain that.’ I said, ‘Okay. How about until I fall to number two, then you fire me?’ ‘No, we made this decision.’ I said, ‘That’s fine.’ Don’t blame Conan O’Brien. Nice guy, good family guy, great guy. He and I have talked and not a problem since then. That’s what managers and people do, they try to get something for their clients. I said, ‘I’ll retire just to avoid what happened the last time.’ Okay.

So time goes by and we stay number one up until the day we leave. We hand – (applause)-No, no. Okay, but I’m leaving before my contract is out. About six to eight months early. So before I could go anywhere else, I would be at least a year or 18 months before I could go and do a show somewhere else. I said to NBC, ‘Would you release me from my contract.’ They said, ‘We want to keep you here.’ Okay. What are your ideas? They said, ‘How about primetime?’ I said, ‘That will never work.’ No, no, we want to put you on at 10:00. We have done focus groups. People will love you at 10:00. Look at these studies showing Jay’s chin at 10:00. People will go crazy. Didn’t seem like a good idea at the time. I said, ‘Alright, can I keep my staff?’ There are 175 people that work here. I said, ‘Can I keep my staff?’ Yes, you can. Let’s try it. We guarantee you two years on the air, guaranteed. Now for the first four or five months against original shows like “CSI” you’ll get killed, but in the spring and summer when the reruns come, that’s when you’ll pick up. Okay, great. I agree to that.

Four months go by, we don’t make it. Meanwhile, Conan’s show during the summer, we’re not on, was not doing well. The great hope was that we would help him. Well, we didn’t help him any, okay. They come and go, ‘This show isn’t working. We want to let you go.’ Can you let me out of my contract? No, you’re still a valuable asset to this company. How valuable can I be? You fired me twice. How valuable can I be? Okay. So then, the affiliates are not happy. The affiliates are the ones that own the TV stations. They’re the ones that sort of makes the decisions, they’re not happy with your performance and Conan is not doing well at 11:30. I said, ‘What’s your idea?’ They said, ‘Well, look, how about you do a half hour show at 11:30?’ Now, where I come from, when your boss gives you a job and you don’t do it well, I think we did a good job here, but we didn’t’ get the ratings, so you get humbled. I said, ‘Okay, I’m not crazy about doing a half hour, but okay. What do you want to do with Conan?’ We’ll put him on at midnight, or 12:05, keeps “The Tonight Show” does all that, he gets the whole hour. I said, okay. You think Conan will go for that? Yes, yes. (Laughter) Almost guarantee you. I said okay. Shake hands, that’s it. I don’t have a manager, I don’t have an agent, that’s my handshake deal.

Next thing I see Conan has a story in the paper saying he doesn’t want to do that. They come back to me and they say if he decides to walk and doesn’t want to do it, do you want the show back? I go, ‘Yeah, I’ll take the show back. If that’s what he wants to do. This way, we keep our people working, fine.’ So that’s pretty much where we are. It looks like we might be back at 11:30, I’m not sure. I don’t know. (applause) I don’t know. But through all of this – through all of this, Conan O’Brien has been a gentleman. He’s a good guy. I have no animosity towards him. This is all business. If you don’t get the ratings, they take you off the air. I think you know this town, you can do almost anything. You get ratings they keep you. I don’t get ratings, he wants. That was NBC’s solution. It didn’t work so we might have an answer for you tomorrow. So, we’ll see. That’s basically where it is.