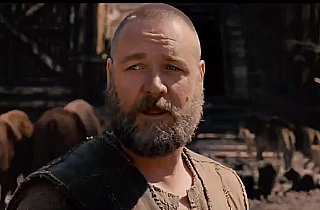 The only spirited debate concerning Darren Aronofsky’s much-publicized film, Noah, seems to be whether it will win its boatload of Razzies as an original or adapted screenplay.

As the media searches for the presence of God — or lack thereof — throughout the film, and concerns itself with historical accuracy in and around the Bible, one wonders whether King James himself authorized the double standard of authenticity in American filmmaking.

Hollywood finds its very sweet spot in the deliciousness of historical inaccuracy — even the popcorn butter is fake. And the Academy of Motion Picture Arts and Sciences, as well as the general public, has rewarded that very faction of box office bastardization for decades. (See Best Picture winners like Braveheart, Shakespeare in Love, and Argo.)

America shouldn’t lose their mind over Russell Crowe picking up some gopher wood just because it’s pouring for some reason. It’s no different than Leonidas’ washboard abs sweating through gravity in 300′s super-slow motion.

Let’s look at a few of this year’s critically acclaimed, and “historically-based” films:

AMERICAN HUSTLE:
From adjusted timelines within the ABSCAM operation to escalating the criminal involvement for characters played by Amy Adams and Jennifer Lawrence (while decreasing, coincidentally, their necklines), David O. Russell’s film makes no bones about bastardizing history for a little bit of entertainment. Would Russell Crowe have been better served building an ark out of perm rods, as the music of Paul McCartney and Wings rained down upon him?

Hustle begins with the narration, “Some of this actually happened.” The same could be said of the Bible.

DALLAS BUYERS CLUB:
Matthew McConaughey’s Oscar-winning portrayal of Ron Woodroof seemingly came in a film that exaggerated and/or invented his homophobia. Whether this was done unknowingly, or with an eye on attracting a larger, less tolerant demographic is arguable. The fact is America cared more for McConaughey’s weight fluctuation than the historical figure he played.

Perhaps Matthew was looking too far in the future to consider his portrayal of the past. But at least he thanked God.

GRAVITY:
Hollywood inaccuracies don’t merely go back in time– they shoot for the stars. The educated world had a scientific field day poking black holes in the physics of Alfonso Cuarón’s film. Does this mean Peter Travers should lambast Noah for not beginning with the melting of the Laurentide Ice Sheet. My guess is CGI will do a better job on the ark than gopherwood and pitch could ever do.

That’s the fun of movies. Even Alanis Morissette can play God.