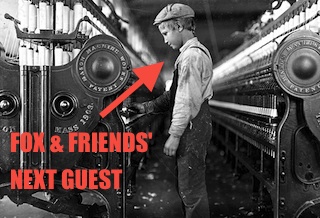 This morning, upon entering the office, I found that Mediate’s industrial-strength eye washer (purchased back when we worried Anthony Weiner might get his own show) was in use. You see, my poor colleague Alex Alvarez had been subjected to this: one of the dumbest segments ever on a news channel. In case you missed it, Fox & Friends did an entire segment this morning in which they desperately tried to get a four year old girl to say her scripted lines about why President Obama is bad for America. In addition to insulting their own viewers to a comically extreme extent (What else do they think there fans will appreciate, political analysis from a shiny piece of tin foil?), Fox & Friends creepily used a couple of children barely old enough to spell the words “fox” or “friends” just to make a cheap political point. But, hey, lets not just put the blame on a TV show that, at this point, we know doesn’t know any better. Let’s share that blame with the people who signed the release forms. The parents!

Unfortunately, I was already familiar with the story of the Sutton family and their free market-loving lemonade stand. No, it wasn’t because I’d stopped in for a delicious refreshing drink/lecture on small business growth. It’s because FoxNews.com already did an article on this story last week. Because of course they did. I mean, why would you waste a story this important on just one platform?!

And, since it was published on the 17th, the Internet has been viciously mocking this quote (emphasis mine…as well as the several billion Tumblr users who have already reblogged and made fun of this):

“Clara Sutton, 7, and little sister Eliza, 4, started CoolBlast Lemonade in their suburban Houston neighborhood, and quickly generated business brisk enough to bring on another employee, younger brother Erik. Their father said the kids have gotten a business education right out in front of their home under the watchful eyes of their parents — but with no help from the government.

Yes, nobody helped them. Nobody except their parents who bought all of their ingredients with money the children didn’t have. You know, just like the way the free market works. Don’t worry, it makes sense. The parents are “investors.”

Anyway, the man who apparently doesn’t understand irony is the girls’ father. Presumably, he’s the one who made the YouTube video that first got Fox’s attention and this is the last I’m going to mention him. Because this column isn’t just about this one parent. It’s about every parent who forces their kids to puppet political talking points that the children can’t possibly understand. Obviously, I can’t tell anyone how to raise their children, but, just like the infamous “puppet dad” clip from last March, this kind of coaching and exploiting is just plain creepy.

So, yeah, lets mock Fox & Friends (and Alex’s column does a great job of that). But they’re not the only ones at fault. It’s like those Toddlers and Tiaras shows. Sure, the producers who step in and tape these things are soulless exploiters. But it’s the parent who actually dresses their kid up like a prostitute and makes her dance.