Don’t Panic! FCC To Shut Down All TV And Radio Today For Emergency System Test 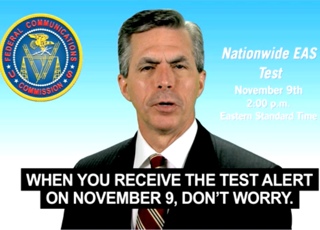 If your favorite TV show or radio program airs weekdays at 2 PM, the FCC has an important message for you. In order to test its new emergency alert system, the FCC has announced it is shutting down all communications on television and radio to test out its new Emergency Alert System on Wednesday, November 9th. While the system has been tested in various states previously, this will be the first all-inclusive, national test.

While the system will be tested nationally this weekend, it is also designed for state emergencies, according to the FCC, like AMBER alerts, but can also work in cases of national security emergencies. It has been designed as a joint venture by the FCC and FEMA. According to the FEMA website:

Besides these announcements, the FCC has released a fairly spooky PSA featuring Chief of the Public Safety and Homeland Security Bureau of the FCC James Barnett, who reminds everyone to please not panic when they lose their television and radio for a few minutes on Wednesday. That ad, courtesy FCC, below: