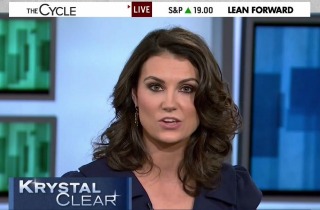 MSNBC host Krystal Ball told her audience on Tuesday that she admires former Secretary of State Hillary Clinton and she would support her over any Republican and most Democrats to replace President Barack Obama. However, she said that America’s present “existential crisis” requires a candidate that is not as “anti-union” and friendly to Wall Street as Clinton. For that reason, Ball urged Clinton not to run and for freshman Sen. Elizabeth Warren (D-MA) to get in the race.

Ball began by saying that she supported Clinton in 2008 over Obama. She said she longed for the competence and respect in government that George W. Bush failed to deliver over his eight years. “But that moment has passed,” she said. “We are now in a moment of existential crisis as a country.”

“In a time when corporations have hijacked our politics,” she continued, “is someone who sat on the rabidly anti-union board of Walmart the right person to restore workers’ rights?”

“In a time when we’re still reeling from global financial disaster brought on by foolhardy bank deregulation, is someone who took $400,000 to give two speeches at Goldman Sachs the person we need to wrest control of the asylum back from the banking inmates?” Ball asked. The MSNBC host further assailed Clinton for reassuring the “masters of the universe” that “banker-bashing” on the left was “unproductive.”

Ball swiped at Bill Clinton as well for signing into law much of the deregulation she was decrying. Ball said that she would back Warren to replace Obama as an example of a politician who felt “in their bones the plight of the worker.”