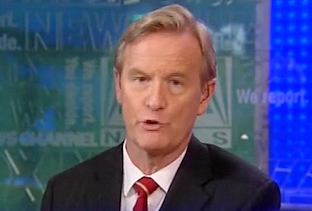 Fox and Friends is, not surprisingly, unhappy with Rolling Stone’s Dzhokhar Tsarnaev cover, and they let loose Thursday morning on the magazine’s decision to run such a provocatively-framed story, comparing the cover unfavorably to the presentation of Michael Hastings’ Stanley McChrystal profile several years ago.

“You can get [Tsarnaev] in other places,” Brian Kilmeade declared. “You can find him in a jumpsuit, you can find his mugshot. Or you could split it with there he is happy, here he is today, looking at the death penalty. That is not something to lure people in. The one they used makes it seem like a sexy thing to go do that, and there’s a lot of impressionable eighteen year olds who think that’s their guy.”

Steve Doocy agreed. “Extremists are trying to recruit young people for jihad, that is just a known fact. And this could give jihad another recruiting tool. Seventy-two virgins? That’s interesting to some. But the cover of the Rolling Stone? That’s delicious.”

“There’s gotta be a line, where you’re America first and some magazine second,” Kilmeade said, differentiating between the article about Tsarnaev and the cover glorifying him. “If you want to talk about his life, what led up to this and how unfathomable it is for a kid that should be so thankful to be here to go to this private school, to be an outstanding athlete and decide he hates America and wants to kill innocent people for jogging in a marathon, that’s journalism. But if you want to glamorize him, put him on the cover as if he’s Jim Morrisson, and not split that cover with how much pain and destruction he caused and how many lives he has ruined, I think that is flat out irresponsible.”