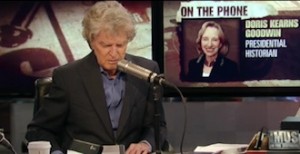 Pulitzer Prize-winning scholar Doris Kearns Goodwin phoned into Don Imus‘s show on Fox Business and spoke glowingly of the Occupy Wall Street movement. “I think it’s exciting, to tell you the truth,” Kearns gushed. “One of the things FDR said is there’s a mysterious cycle of human events, periodic cycles of activism and reform. When you see people out there finally talking about what’s happening to the country — we saw it in the progressive era, we’ve seen it in the 60’s, we’ve seen it to some extent in the tea party and now we’re seeing it here.” “We need you down there to break out your old 60’s headband!” Imus exclaimed. “We need you down there to provide them focus.”

Goodwin spoke about her husband, Richard Goodwin’s book, Promises To Keep, which she said could provide a focus for the demonstrators. “What he talked about, he talked about promises to keep,” Goodwin explained. “It was calling for this kind of movement saying there are two pillars of our country, democracy and capitalism. Capitalism is the creation and distribution of wealth, but democracy makes sure that that distribution is somehow helping the benefits of the country as a whole, not the few. He talked about breaking up big companies, executive compensation linked to actual economic performance, taxes on noninvested profits and forcing reduction in campaign spending, balanced budget. Incredible, a lot of the stuff we’re talking about now — hedge funds, reckless loans — and the needs. He said the differences in wealth is fine. It’s fine for individuals to be rich but when you’ve got CEOs who get a $20 million parachute or reckless bankers not being chastised, you’ve got a problem.”

Imus thought Goodwin’s husband’s solutions sounded a lot like Rolling Stone writer Matt Taibbi‘s, who wrote on how activists could sharpen the protest’s overall message. “There are five points they ought to start articulating,” Imus said, referring to Taibbi. “One, break up the monopolies of these so-called too-big-to fail companies, make these outfits pay for their own bailouts, don’t provide public money for private lobbying, tax the hedge fund gamblers and change the way bankers get paid.”

Watch the interview with Goodwin below via FBN: