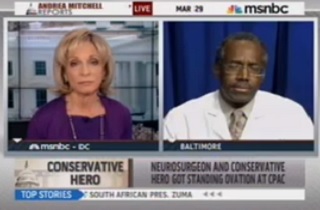 Newly-anointed GOP superstar and prayer breakfast über-pwner Dr. Ben Carson offended many, and surprised none, when he made the familiar-for-conservatives comparison of gay people with “NAMBLA” and “people who believe in bestiality” earlier this week. On Friday’s Andrea Mitchell Reports, Dr. Carson delivered a standard “sorry if you were offended” apology, and explained that he was really just comparing gay people to a variety of fruits, or something. Andrea Mitchell helpfully pointed out that peaches, bananas, and oranges are not characterized by criminal conduct.

Carson told Sean Hannity, on Tuesday, that “My thoughts are that marriage is between a man and a woman. It’s a well-established, fundamental pillar of society, and no group, be they gays, be they NAMBLA, be they people who believe in bestiality, it doesn’t matter what they are. They don’t get to change the definition.”

Dr. Carson, a neurosurgeon at Johns Hopkins, began his interview with Mitchell by claiming his words were taken out of context. As it turns out, Mitchell read all of Dr. Carson’s quote, except this: “So, it’s not something that is against gays, it’s against anybody who wants to come along and change the fundamental definitions of pillars of society. It has significant ramifications.”

He went on to say that “as a Christian, I have a duty to love all people, and that includes people who have other sexual orientations, and I certainly do.”

This presumably means he also loves pedophiles and animal rapists, but Mitchell missed the chance to clarify that point.

Right, but it does mean you’re placing therm all into the same category, which Mitchell quickly pointed out. “With all due respect, Dr. Carson. you say you’re not equating and you’re talking about apples, oranges, peaches. But when you say that the well-established pillar of society, no group, be they gays, be they NAMBLA, the society for man-boy love, which, we’re talking about pedophilia. So we’re talking about something that is illegal. Be they people who believe in bestiality, you are in the same sentence, equating same-sex marriage with things that are illegal.”

Carson disagreed, but it’s doubtful he would think a statement like “No one, not Ben Carson, not Jerry Sandusky, and not Jeffrey Dahmer, has the right to tell people they can’t get married” would be very fair.

He did say he was fine with gay people making legal arrangements, and enjoying all of the legal rights, as married couples, and even extended that acceptance to “any two adults.”

Mitchell also pointed out that it wasn’t long ago that this pillar of society excluded black people from marrying outside their race, but that’s different, because marriage “is an institution that was established by God,” later adding that “the Bible and God have set very specific standards. It’s very clear what’s being said. God doesn’t change, man changes.”

Unfortunately, Mitchell didn’t ask Dr. Carson about all of the polygamy, incest, and rape in the Bible, or the way the Bible used to forbid black people from marrying white people, but that’s obviously totally different, because The Dictionary.

Dr. Carson’s problem is the same as every other bigot’s; he assumes that his intentions and/or his beliefs are what matters, and not his insistence on imposing them on others.